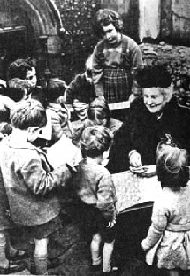 Maria Montessori, the first woman physician in Italy, was one of the great pioneers in the study of child development. In 1908 Dr. Montessori's dramatic accomplishments with a group of young children in the slums of Rome earned worldwide acclaim and became a landmark event in education.

Dr. Montessori noted that many children were frustrated by a lack of proper stimulation and inadequate opportunities to achieve. She observed that children became happier and more self-controlled after a period of time in the orderly environment she had created. Here they were introduced to challenging tasks which not only absorbed their energies but resulted in a sense of achievement. This led Montessori to develop the planned system of education that bears her name.

These Web sites also contain a wealth of information about the Montessori philosophy: